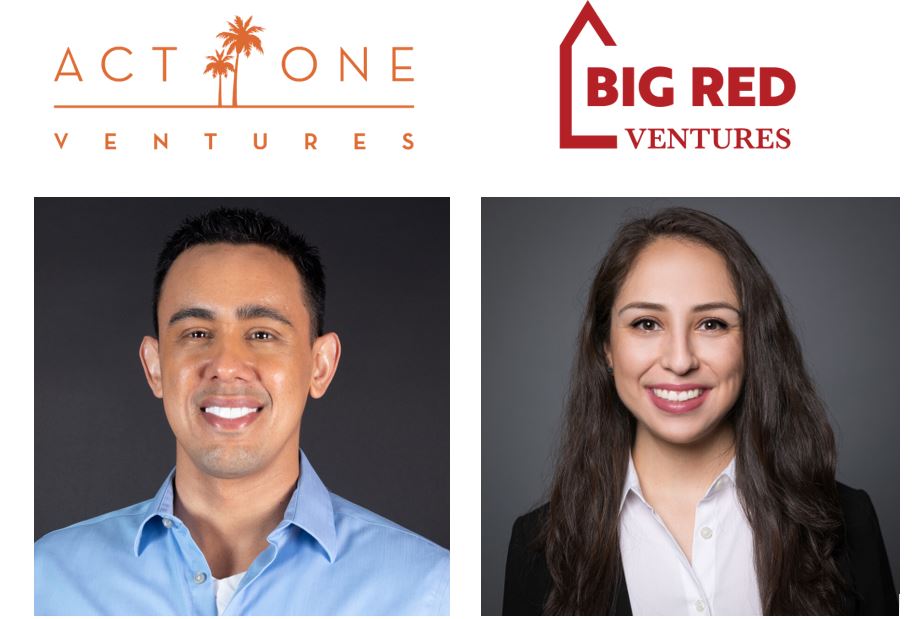 Alejandro Guerrero is Co-Founder and General Partner at Act One Ventures, an early-stage micro-VC fund based in Los Angeles. Started in 2015 by Guerrero and Michael Stilton, Act One Ventures is community-focused and leads pre-seed and seed rounds in ecommerce infrastructure, vertical SaaS, and fintech. Over the last seven years, Act One Ventures has committed itself to diversity, developing a portfolio in which 70% of its companies are led by women and individuals from underrepresented groups.

As a first-generation college graduate and a Mexican American, Guerrero is a rarity in venture capital, a historically white and male-dominated industry in which Latino entrepreneurs only account for 2% of all venture funding¹ and only 1.8% of VC firms are founded by Latinos.² Frustrated by the industry’s claim to support diversity efforts but ultimately failing to fulfill on this promise and determined to change the lack of diversity in VC, Guerrero has committed his career to diversity and addressing systemic inequity in venture capital. Big Red Venture’s Micaela Lucero (JD/MBA ’22) sat down with Guerrero to discuss the systemic inequity that plagues venture capital and how venture capitalists and founders can take tangible action to increase diversity in the industry.

When people typically think of startups, they commonly think of reality shows like Shark Tank or Hollywood depictions of the most famous—and infamous—startups like Facebook, WeWork, or Theranos. For those who know a bit more about the industry, accelerators like Y Combinator and VC funds like Sequoia Capital likely come to mind. But regardless of familiarity with the industry, there’s one thing people probably are not thinking about—who isn’t represented in VC and why that’s a problem.

So, who isn’t represented in VC? Women. Blacks. Latinos. Native Americans. Asians. Members of the LGBTQ community. People who are differently abled. While it surprises no one that venture capital is a predominately white and male dominated industry, it surprises most just how stark these figures are. Women make up roughly 50% of the population, but only capture 2% of venture capital dollars.³ Even though the US is on track to be a minority majority nation by 2045,⁴ 58% of VCs are white men.⁵ Simply put, the VC industry has cut off access and capital from diverse populations. Alejandro Guerrero is changing that.

Guerrero’s path to becoming a venture capitalist is not a typical—or even an intentional—one. The son of parents who immigrated from Mexico, Guerrero did not dream of being an investor or an entrepreneur as a child. It is also not what his parents envisioned. The Guerreros instilled a strong work ethic in their son and hoped he would have a stable career. But the recession changed that. Like many 2007 college graduates, he had been laid off from his finance job. Frustrated by the lack of agency and control over his own career that comes with corporate America, Guerrero decided to create his own destiny. Instead of recruiting and finding a job, he created his next job and founded Live Entertainment Network (“LEN”).

Guerrero worked tirelessly to build his startup, LEN. When LEN was ready for outside capital, Guerrero found it was nearly impossible to raise. In the shadows of billions of VC dollars being poured into tech during the search for unicorns like Uber and Airbnb, Guerrero was dismissed and disregarded by venture capitalists. He had created a growing startup and fostered a work culture in which each employee could speak up, but without a recognizable last name or connections, he largely lacked access to the VC world. He eventually raised money from angels and ran his business for a couple years before starting his next business, UniqApps.

While scaling his second business and facing similar issues with lack of access to the VC world, he sought out mentorship to understand how the VC world works and how to gain access to its network. At the UCLA VC Fund, he met his mentor and future Act One Ventures co-founder Michael Silton, a serial entrepreneur—who had taken a company public and ran it for 10 years—turned venture capitalist. He volunteered for Silton without the intention of becoming a VC. An entrepreneur at heart, Guerrero wanted insight into the industry and to understand how it worked.

Working at the UCLA VC Fund was an eye-opening experience and affirmed Guerrero’s experience that minority entrepreneurs lack access and capital. There were no Latina founders visible. He never met a single Latinx VC. The lack of diversity in VC was isolating for him, but then he received an opportunity that changed his life. In 2015 Michael Silton asked him to be his co-founder in the building of their next mutual venture: A VC firm, called Act One Ventures. Just like that, he was now on the other side of the table, with a lot of responsibility being entrusted to him: he was raising capital from Limited Partners – the investors of the investors – and now making decisions about which startups to invest in. With Silton’s mentorship, this is where Guerrero would make his greatest impact both as an investor and as a champion for diversity.

Through Act One Ventures, Guerrero focused on bringing diverse deals and founders into its portfolio. Yet, it wasn’t enough. In the aftermath of the murder of George Floyd, Guerrero knew that he had to do more to address systemic inequality. He had seen reckoning and awareness come to the forefront of the VC industry during the #MeToo era, but he noticed that nothing actually changed. VC funds discussed the need for more women founders and investors, but there was no tangible action. VC continued to focus on name-brand investors and well-known founders. He found that unless an investor belonged to a top 10 fund, they weren’t deemed “worthy” to manage money. Graduating from top schools didn’t even matter for gaining access. All that mattered was the network, and the network of VCs is mainly composed of white men.

But June 2020 was different. He knew this moment was different from anything that he had seen in his life and career. He bet that if he wanted to change VC, he had to change how access and capital are allocated. Because he was an entrepreneur that raised money and because he is a VC, he knew how raising money works on both sides of the table. He used that knowledge to figure out practical ways to get women and people of color into the game of creating generational wealth: equity and access. He took out a paper and started sketching out how it would work. He stepped back into the creative mindset of a founder, writing down concepts and trying to figure out the how and why of it all. He knew the key to change was getting more women and people of color emerging managers, access to deals typically reserved for insiders only. Access to deals as a co-investor builds you a track record; being co-invested with “top tier funds” gives you “credibility;” and that in turn makes an emerging manager a more “desirable” target for Limited Partner capital, which then can be invested by women and people of color, into other women and people of color. He created the Diversity Rider.

The Diversity Rider is a call to action that puts diversity at the forefront of each venture deal. Included in a venture fund’s standard term sheet (“TS”), the Diversity Rider’s call to action is that at the negotiation stage of a TS, both founders and investors agree to work together to identify a woman or person of color co-investor, who would be an incredible value add to the deal / company. Even if a fund wants to invest in a startup that only has white male founders, it can still create a diverse deal by bringing in a woman or person of color as part of the syndicate. This created an incentive for VCs to stop relying on their address book of Harvard and Stanford buddies for the syndicate and venture out to find new people to co-invest with—new, diverse people.

The Diversity Rider provides opportunity for both founders and investors. It gives startup founders the agency to insist that their syndicate is diverse. It gives funds the opportunity to expand their syndicate network and incentivizes them to hire diverse GPs and bring on diverse LPs for their raises. Guerrero states that the Diversity Rider is not an attempt to make people feel bad about the history of VC and its exclusion of minorities. Rather, it is a tool—a simple, tangible way to make each deal diverse.

When he first created the Diversity Rider, Guerrero received a lot of pushback. He initially named it the George and Breonna Rider, but several white male VCs that he spoke with stated that the name was a non-starter. They cited reasons like needing to get the families’ permission, but the reality was that they were uncomfortable by the idea in and of itself. He also initially started out at 10% reserved for a co-investor, but no one was willing to agree to 10% (or any firm number, for that matter).  Recognizing that VC would not change overnight, and it would take small steps and decades of work to create a more diverse VC industry, he shaved it down to a simple call to action, with absolutely no barrier to entry:

In order to advance diversity efforts in the venture capital industry, the Company and the lead investor, [Fund Name], will make commercial best efforts to offer and make every attempt to include as a co-investor in the financing at least one Black [or other underrepresented group including but not limited to Latinx, women, LGBTQ+] check writer (DCWs), and to allocate a minimum of [X]% or [X] $’s of the total round for such co-investor.

Act One Ventures launched the Diversity Rider in 2020 with 10 firms, which included top investment firms Greycroft, Maveron, and First Round Capital. Two years later, Guerrero’s hope proved correct. It has become a movement. The Diversity Rider has gained significant traction with over 125 funds publicly using it and boasting over $60B in assets under management. Cooley GO, a resource for entrepreneurs launched by law firm Cooley, uses it in its standard term sheet. Founders use it regularly. Guerrero was right that it would take off—the industry simply needed a workable framework to facilitate change.

When asked about the future of VC and diversity, Guerrero stated that we are “just getting started.” Everyday people are aware of the importance of generational wealth and that significant wealth is made in private, not public, markets. The private markets have shut everyday people out, but people are demanding a way in. They are tired of seeing the wealthy get wealthier while the middle class shrinks, and the poor stay poor. He expects to see tools like crowdfunding continue to grow and to allow more people in, and also sees crypto as a push against traditional finance that has become a force to be reckoned with and an opportunity for more diversity and income equality. Guerrero acknowledges that VC has a long way to go, but he’s optimistic that with each diverse deal and continued call for diversity, we’ll get closer to creating an industry where anyone can succeed.

⁵ Elizabeth Edwards, Check Your Stats: The Lack of Diversity in Venture Capital is Worse Than It Looks, Forbes, Feb. 24, 2021,  https://www.forbes.com/sites/elizabethedwards/2021/02/24/check-your-stats-the-lack-of-diversity-in-venture-capital-is-worse-than-it-looks/?sh=28f559ba185d